Kadiatu is 25 years old. Her first pregnancy, in 2007, ended in an emergency cesarean section after 2–3 days of labor. The baby was stillborn, and Kadiatu developed an obstetric fistula. That same year, Kadiatu received a repair surgery at the Aberdeen Women’s Centre. 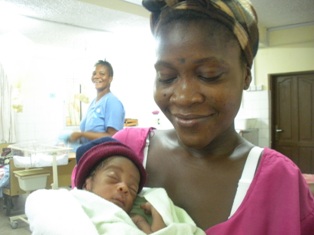 In 2010, the Aberdeen Women’s Centre opened a maternity unit, where Kadiatu registered and came for regular antenatal care. At 35 weeks, she was admitted to the center with complications. The baby needed to be delivered, and clinical staff performed a cesarean section. At birth, Kadiatu’s baby boy weighed just 1.48 kg (about 3.3 lb). In the absence of a neonatal unit, the Aberdeen Women’s Centre relied on kangaroo care, oxygen therapy, intravenous fluids, and antibiotics. Eventually, the baby was able to breastfeed.

When Kadiatu and her baby were discharged, they were both happily healthy: The boy weighed 2.08 kg, and Kadiatu was fistula-free. Aberdeen Women’s Centre staff from both the fistula ward and the maternity unit were delighted.