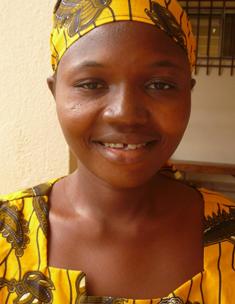 Hannah lives in Freetown, Sierra Leone. Because she came from a poor farming family, Hannah did not finish primary school. Hannah was married at 18 and quickly became pregnant. When it was time to deliver, she went to a traditional birth attendant. After two full days of labor with no delivery, she went to a local maternity hospital. Because Sierra Leone was in the middle of a civil war, no doctors were available there, and Hannah had to go to another hospital in the area, where a doctor was able to perform a cesarean delivery. Tragically, the baby was stillborn.

Hannah realized she was leaking urine, and she also started leaking stool as well. Her husband and family members shunned her. One day, she met a former patient from Aberdeen Women’s Centre, who told her about the surgeries done there. When she arrived, she met many other women who were also suffering from fistula. Her repair was done in two stages, and when her treatment was over, she was dry. Hannah was excited about going home and sharing the news that she has been healed.