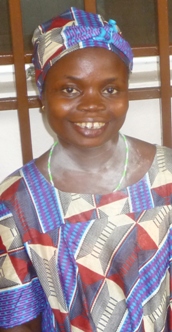 Binta lives in a village called Pintkel, in the Tambakka Chiefdom. Because of her family’s financial constraints, Binta did not attend school; instead, she married when young, to Mr. Mohamed, a farmer. She was his only wife.

Binta had three pregnancies. During her third pregnancy, her labor failed to progress, and she went to the village’s traditional birth attendant. She struggled through the night, and in the morning, the attendant took her to the maternity clinic. The baby was stuck, and the nurse referred her to a hospital.

There, Binta had a stillbirth. She was in the hospital for one month. When she was discharged, she leaked urine all the time. For eight years, she was wet, and her husband shunned her. Binta says she did not smile for all that time.