Genital fistula, an abnormal hole between the vagina and rectum or bladder that causes urinary or fecal incontinence, is a devastating, preventable condition that no woman should have to endure. It usually results from inadequately managed, prolonged or obstructed labor, surgical error, or trauma [1, 2].  Although rare, it can be completely debilitating—physically, socially, and economically—particularly to women who live in remote areas without access to treatment; women with fistula are often shunned from the household or society, which can cause immense suffering  [3].

While sexual violence can cause traumatic fistula, the vulnerable state of women with fistula gives reason to suspect that the risk of violence could also increase after the onset of fistula [4, 5, 6], though no studies have attempted to evaluate this to date.  Moreover, because it is so rare, it is difficult to capture statistically significant associations with the condition. 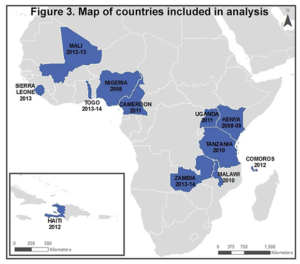 The DHS Program provides an opportunity to study such rare events because of the inclusion of standardized questions in numerous, nationally-representative  surveys with large sample sizes. In a study conducted to further examine the relationship between fistula and violence, data were pooled from 12 DHS surveys, 11 conducted in Sub-Saharan African countries and one in Haiti, where standardized modules (sets of questions) on the two topics were included.

One other finding of interest was that women whose first experience of sexual violence was committed by a non-partner had over four times the odds of reporting symptoms of fistula than women who did not report sexual violence.  Although inferences from these findings can only be made with caution, the temporality relationship between fistula and sexual violence deserves further investigation.

In light of International Day to End Fistula on May 23, it is imperative to continue to work towards minimizing occurrence of fistula by building awareness around conditions that contribute to and result from this morbidity. This study shows yet another disheartening correlation between gender-based violence and poor health outcomes for women. It provides even more impetus for training and sensitivity for women’s health care providers in this area. 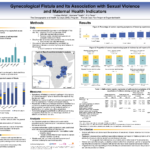 A poster presentation of the study was exhibited at the 2016 Annual Meeting of the Population Association of America (PAA) in Washington DC. More information can be found in this poster.

Lindsay Mallick joined The DHS Program in 2014 as a Data Analyst for the Research and Analysis team. She has worked on studies that have used data from DHS and SPA surveys, on topics such as maternal health, gynecological fistula, and health services. She has an MPH in International Health and Development from Tulane University and served in the Peace Corps in Mauritania, West Africa.