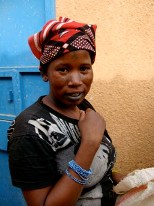 A bit over a year ago, 24-year-old Mariama developed an obstetric fistula. She had been pregnant for the first time, and when she went into labor, the baby would not come. Mariama labored for two days at home before her family took her on the four-hour journey to Niger’s capital, Niamey, where she could have a cesarean section. By that time, however, her baby was dead. Mariama has not returned to her husband since her stillbirth and the start of her leaking, but she is eager to have surgery to repair the hole that formed during her prolonged labor. She has spent two months at the hospital, waiting for the surgical team to be available and for a bed to become available for her on the ward. She never imagined that such a birth injury would happen to her, commenting, “You may not see a hyena during the day, but it will come and eat you during the night.”