Paulina was lying on her bed listening to the radio, when suddenly she shouted for joy. The “Health Watch” program on Radio Nigeria was describing her problem exactly, a secret she had lived with for 25 years and despaired of ever overcoming. And the radio said that she could be healed, free of charge. As soon as she heard the program, she knew her life would be transformed.

Twenty-five years earlier, Paulina had given birth to a daughter. She labored for days, first at home, then at a church, then at two hospitals. By the time she reached the second hospital, she was so weak that she could not sign any forms. The cousin who was accompanying her lifted her limp hand to push a thumb print of consent. 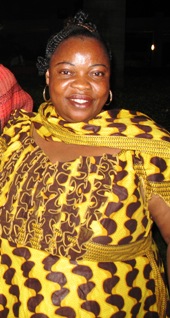 As she was recovering from her prolonged labor, Paulina realized that she was leaking urine uncontrollably. She padded herself to try to soak up the urine. She successfully hid her problem and continued with her studies, finishing school and finding a job while at the same time raising her daughter.

Paulina spent a great deal of money in hope of being cured, but to no avail. First, she had an operation, but it was not successful. Following that, she met a doctor who told her he could repair her at his private hospital, but he took her money and then did not operate.

No one knew about the leaking except Paulina, her husband, and their families, but even so Paulina felt the sting of stigma. Her in-laws told her husband to remarry, and after her fruitless efforts to be healed, even Paulina urged her husband to find another wife. Her husband married again, and Paulina’s co-wife bore five children. Paulina did not think that she would ever be able to control her urine again.

But then she heard the radio program that described the ACQUIRE/Fistula Care Project, which is funded by the U.S. Agency for Development and is managed by EngenderHealth. The project supports hospitals to provide repairs to women like Paulina who suffer from obstetric fistula. At the end of the radio broadcast, the host invited listeners to call. Paulina was given an appointment to be surgically repaired at a hospital that ACQUIRE/Fistula Care supports.

Today, Paulina is dry again, completely restored to health. She is eager to counsel other women with fistula who may be despairing as she once was. Paulina wants to advise women to seek skilled care when they are giving birth instead of being careless, as she was. She is very grateful to the ACQUIRE/Fistula Care Project, saying that God is the one who records the lives that the project has saved.