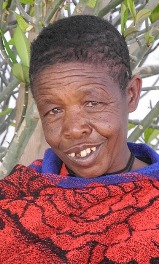 Meet Zemede, Age 42. At the age of 15, Zemede became pregnant. At full term, she labored for 12 days, and her baby was stillborn. A week later, Zemede found that she could not walk and that urine was flowing continuously.

Zemede stayed in Lalibela to live with her family, who were day laborers with little income. Regularly, Zemede would go to the health center to receive antibiotics to treat her infections. The health workers there often advised Zemede to go to Addis Ababa for repair, but she never had the funds to go. She was also caring for her parents and could not leave them. When her parents died, she sold the trees off a plot of land that they owned and she has been living off those funds.

The fistula resulted in foot drop, which prevents Zemede from being able to carry loads. She has been unable to work. The community and government provide her with food aid, when it is available, and with an identification card that allows her to receive free treatment at health facilities.

Zemede has made many adjustments to living with fistula. As a member of a community association, she sits aside from the others at the meetings. Most troubling to her is that she is not able to go inside the church since her condition started and has only been able to worship at a distance. She carries water and soap with her so she can wash herself when necessary. If the weather is particularly hot and the sun is shining, people ask her to move into the shade, where the sun is less able to strengthen the smell of the urine. For 27 years, Zemede has been managing her condition in this manner.

Two years ago, a priest and his daughter passed through town looking for shelter. He was on his way to another town to take his daughter to the fistula hospital for repair. Finding lodging is difficult for women with fistula, due to the leakage and smell. Community members pointed the priest to Zemede’s house. At first, she was reluctant to let them stay with her, as her home is very small and she feared it would not be comfortable for them, but then she realized that they had no other place to go. On the way back from the hospital, the father and daughter stopped at her home again.  Zemede saw that the daughter was clean and dry and thought to herself “I can do this,” but she did not have any funds for transportation. In those two years, news of her generosity spread, and many women came to Zemede’s home on their journey to repair.

When the local health center learned about the pre-repair unit at Sekota, they contacted a fistula mentor to tell him about Zemede. On his way back to Sekota from a recent trip, he stopped in Lalibela to pick her up. Now it is her turn. When Zemede is cured, she wants to become a nun. Not being able to go into the church has been one of the most difficult things about living with fistula. At last, she will be able to enter the church again.